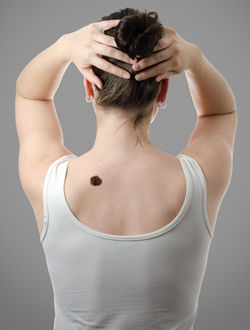 A team of researchers at Oregon State University have found a specific biochemical process that can make normal, healthy skin cells change into cancerous melanoma cells. Their research findings can help assess melanoma vulnerability and also lead to the development of new diagnostic tools and therapies in the future. The researchers believe this is a breakthrough in understanding what exactly causes this deadly form of skin cancer.

One of the lead researchers said they found certain mechanisms which typically prevent cancer, tend to switch around and actually help promote it. This study reveals that the immune system is thrown into reverse in melanoma. Immune cells that were previously attracted to help in dealing a problem are instead pulsated. The key to this process is a protein known as retinoid-X-receptor or RXR and the primary players are skin cells known as melanocytes, which produce protective pigments when the skin is exposed to ultraviolet radiation in sunlight. If present in an adequate amount, RXR aids in the proper operation of the immune response.

However, even with this protection, melanocytes and other skin cells (keratinocytes) suffer genetic damage on a routine basis. Sometimes, such damage is repaired and at other times the immune response will destroy the defective skin cells before they become cancerous if adequate levels of RXR are present in the melanocytes.

This protective process will break down when the levels of RXR become too low in the melanocytes, which will suppress the chemicals that can help control mutated cells, thereby promoting the conditions for cancer. When DNA-mutated melanocytes begin to thrive, the other skin cells will die and free up space for the mutating melanocytes and eventually result in melanoma, which, in turn, will spread throughout the body.

This process has not outlined in its entirety before, according to the researcher, and opens up the possibility to develop a new diagnostic test to determine whether the RXR levels are lower than adequate levels which would lead to melanoma. Also, careful monitoring of RXR levels can facilitate earlier diagnosis of the cancer. In addition to that, mechanisms may be developed to stabilize or stimulate RXR levels which form the basis for a therapy. This can be done through diet or with a ‘nanocarrier’ drug that can deliver RXR to cells.

Melanoma is the deadliest form of skin cancer and it is estimated that more than 70,000 cases of melanoma are diagnosed in the U.S. each year. Medical researchers undoubtedly have a critical role in finding new and effective methods to prevent and treat the disease. A lot of work involved in the research process – conducting experiments, collecting evidence, and collating facts, all of which is challenging and time-consuming. Fortunately, support is available for documentation and transcription, and this goes a long way in helping them focus on their core tasks.