How Relevant Is Virtual Reality for Business Conference Calls? 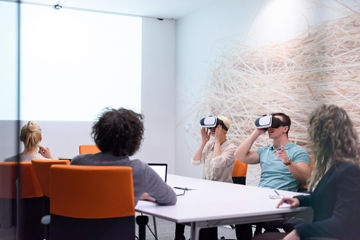 Conference call is a simple telephone conversation involving three or more people. It enables people from different geographic locations to meet at a prearranged time and communicate via phone. The idea behind a conference call is to bring people who are in different parts of the world together to make informed decisions. Conference calls are useful for business as they make meetings so much more convenient. A conference call is useful for making quick and immediate decisions and with conference call transcription, your calls can be recorded and transcribed into the desired text format and reviewed in detail when required.

As technology is advancing, the process of holding conference calls and the equipment used for it are also changing. The latest trend in the conference call scenario is virtual reality. With equipment for virtual reality now on the consumer market, public tech companies and venture capitalists are exploring its possible application in everything from video games to medicines. The virtual reality market is expected to grow to $407 million and 25 million users by 2018.In 2016, $ 63 million Virtual Reality headsets were shipped compared to 1.5 million smartphones. Companies like Linden Lab say that soon it may be implemented in work meetings.

According to a global survey on attitude towards technology in the workplace by Dell Inc, Intel Corp and consultants Penn Schoen Berland, 57 percent of employees around the world prefer face-to-face conversation with colleagues. But more than half of them said that better communication technology can make such interactions outdated. Millennials were open to using virtual and augmented reality products at work with 77 percent saying they would try it.

Businesses use Skype for business communication, but it has its own shortcomings. VR or virtual reality may be the new solution for making uninterrupted and efficient conference calls. According to Eric Boyd, a professor of marketing at James Madison University, “It gets as close as we can right now to really replicate a face to face type of meeting”. He is guest editing an upcoming issue of the Journal of Business Research that focuses on virtual reality.

Video calls allow you to see facial expressions, and these calls do provide a certain level of closeness between the participants. However, you can understand their mental attitude only from the face, whereas being able to see how they are sitting, whether they are open and receptive, whether they are eager about what is being discussed, and so on would provide more detailed information. VR is advantageous in that it enhances interactivity and provides more information. With the provision of having individual “avatars,” it ensures a connection between personnel that a phone or video may not be able to provide. 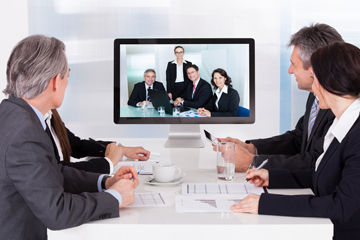 Linden Lab was one of the first companies to use VR and Bjorn Laurin, VP of product at Linden Lab said that “it’s happening” and he predicted that virtual meeting will become as commonplace as owning an iPhone within 5 to 10 years. According to Derek Belch, founder and CEO at STRIVR, people are still not comfortable enough to walk around with headsets for a long period of time. So, VR meetings may not become a reality that soon. He further points out that headsets are currently very heavy and strapping them to the face is not easy. If the headsets are modified to a point where it is comfortable for people to wear for an entire meeting, then it won’t be a problem. Some people have been found to experience dizziness and motion sickness in a virtual setting. Regarding side effects of using headsets, ophthalmologists say that though there may not be serious side effects from putting the screen an inch from the eyeball for an hour, fatigue and strain may be experienced.

The trend in remote work is one of the factors that will determine how widespread the adoption of VR meetings is going to be. Some companies are not encouraging remote work altogether in order to keep the company culture alive. IBM is one of the pioneers of remote work, but recently it stopped and asked the employees to either come back to the office or quit. However, according to Boyd, everyone is optimistic that in five years virtual meetings may be implemented in almost all companies and become popular in the business world; in 10 or 8 years we are very likely to see emerging technology that can completely support it.

Many companies are investing in virtual meetings though it is in experimental stage. Mike Harlick, head of the Bank of Ireland Worklab tweeted about virtual reality meeting that felt it to be “the future of collaboration”. He told The Wall Street Journal that his firm is experimenting with various virtual conferencing centres. He doesn’t believe that virtual meetings will replace video calls, but it does provide functions that other collaboration tools do not offer. He thinks that this will help him and his team to be more effective in the way they communicate.

Technological advancements are transforming the conventional manner of conducting a business meeting. However, recording and transcribing videos and audios, and conference transcription service will continue to play a crucial role in business settings.