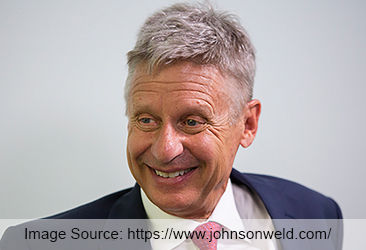 Face-to-face interview may involve non-verbal communication such as hand, face and body gestures.The Libertarian presidential candidate Gary Johnson’s recent interview for NBC news is making headlines now, with this former New Mexico Governor pulling a stunt in an attempt to show that he is tongue-tied.

The question was if he managed to get on the debate stage, whether he could pull even with Hillary Clinton and Donald Trump in the ensuing polls. He started answering the question like a traditional politician saying he would be able to do so, adding that it would not have anything to do with his debate performance. He believed that people would recognize that there was another choice, that there would be an examination of him and Bill Weld regarding who they were and what they had done, and not based on the debate.

Then he suddenly stuck his tongue out, bit it and said something incoherent, but which sounded like “I’m not gonna stand up there for the whole debate and not say anything and …..” or something like “I could do not a say anything through the whole debate and emerge as –”. The Washington Post remarks that transcription services will have to slow down the tape for this part.

So, how does one transcribe such gestures and incoherent words? In the above context, they are significant. The speaker’s revealing gestures and facial expressions are to be clearly conveyed in a transcript. How challenging is it to transcribe gestures? With verbatim or word-to-word transcription, transcriptionists have options to document non-verbal communications in interviews. This communication has a lot of components other than words. Verbatim transcripts would include every single sound and word the speaker says. Fillers, non-words and other sounds that are relevant to the context would be transcribed. Such non-verbal actions will be clearly mentioned so that the readers understand the transcript better. Misquoting a speaker can have legal ramifications, and this speaks volumes of the significance of accuracy in transcription.

Facial expressions are a crucial part of communication. Though nothing is said verbally, there is much to be understood. It is recommended that in interview transcription, facial expression, description of an action, pauses, silences or body language are included in brackets.

Brackets can also be used to insert technical information such as sound quality, incapacity to understand certain words or sentences, or to make a note to verify the correct spelling of names of places or people.

When prepared by professional transcriptionists, these transcripts are more readable and they do a better job of conveying the speaker’s message.