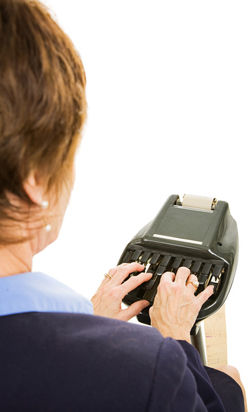 A court reporter typed gibberish statements while preparing legal transcripts and the botched transcripts had reportedly led to appeals in as many as 30 Manhattan court cases, one of which included the 2010 fraud trial of a mortgage broker who was convicted of trying to hire a hit man to eliminate a witness. One source claimed that the gibberish typing might have put many hard-won convictions at risk by providing a chance for criminals to claim that the critical evidence is missing. This incident highlights why legal transcription must be done by a dedicated professional who can ensure top accuracy.

As per the report published in the New York Post, the court reporter hit random keys during a high-profile criminal trial and repeatedly typed ‘I hate my job’ instead of the trial dialogue. The judges were reportedly holding ‘reconstruction hearings’ to resolve the havoc caused by the botched up transcripts, so that those involved in a case can testify about what they remember. However, the officials say that it is very difficult to prepare sufficient records based on what people recollect several years after the incident.

Though the court reporter denied he typed gibberish and retorted he was fired for substance abuse, his father said he became an alcoholic five years ago and was in rehabilitation.

While deliberate errors like this are actually quite rare, court reporters can commit mistakes during transcription such as incorrect spelling of names, medical terms or unique words, incorrect deposition of data points (time, date, location), and more. The chances of such errors would be higher if there are a large number of trial dialogues to transcribe. That’s why court reporters are increasingly relying on transcription services to manage their huge work load and produce error-free transcripts. However, in this context, two important considerations need to be taken into account while hiring a court transcription company.